This post goes over some of our findings in improving performance of one of our Apache Camel based web services.  The past year, Ticketmaster has seen tremendous growth in our new product, TM+, of which our service is a key component. With the increase in traffic, we have been working hard to ensure acceptable response times for our customer-facing services.  For the most part, our service has performed well, with a majority of requests completing within our desired duration. However, we had occasional requests which took longer to execute, at seemingly random intervals, so we set about to investigate and fix these worst-case performance spikes.

CSI (Consolidated System of Inventory) is one of our central web services that acts as an abstraction layer for transactional APIs across a potentially wide range of inventory sources.  We use Apache Camel – for its excellent support of Enterprise Integration Patterns – to route requests to other web services.  Through this investigation, we found several optimizations to the way we use Camel that have greatly reduced garbage collection times, and as a result, improved performance.

Note that the issues and solutions presented here were discovered using Camel 2.9.2. Another thing to note is that the custom graphs you’re seeing here are all based on Ticketmaster’s awesome open source graphing solution, Metrilyx, which is a visualization layer on top of OpenTSDB. 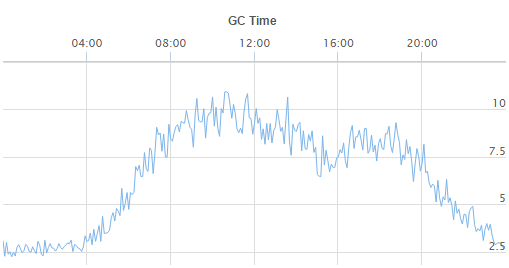 We turned on garbage collection logs and confirmed that collection times directly correlated with the pauses we were seeing in the application.  Our problem identified, the next step was to find out how and why our application was allocating excessive amounts of memory.  We had had success using Java’s VisualVM to diagnose previous memory issues, so we began by using that tool to inspect heap dumps.

Although the excessive garbage collection times are a result of memory usage, the issue is not a memory leak, so the problem objects are not immediately apparent in a heap dump.  We were already suspicious of our Camel integration when looking at GC issues, so we drilled down to Camel objects in a heap dump to look for clues.  The heap dump was taken while we were putting load on our service, so although the heap dump process temporarily stops the application and triggers a full garbage collection before retrieving the memory snapshot, there were enough in-flight requests to reveal Camel’s TypeMapping class as a possible offender.  Objects of this class are very small, but they are allocated at a high rate compared to the overall rate of requests, so we then began to examine what causes these objects to be created. 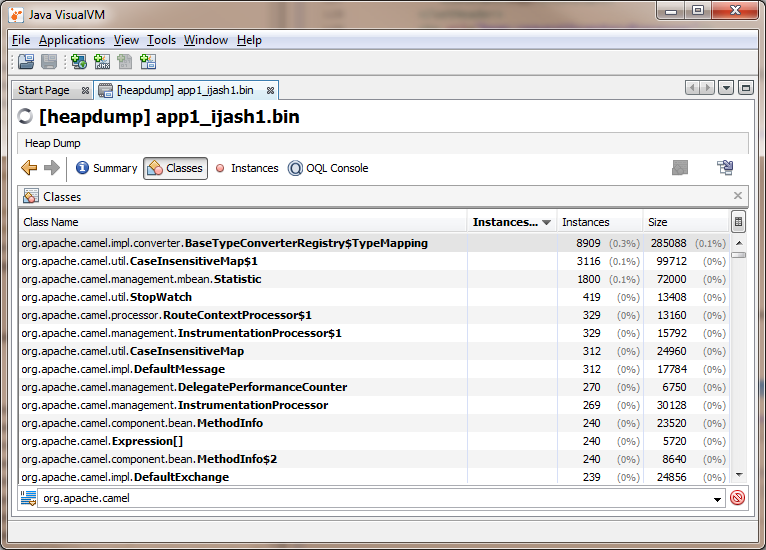 Apache Camel has a very flexible TypeConverter API for transforming objects, which examines a variety of different aspects of the source object to determine whether a desired conversion is possible.  Those aspects include type hierarchy, whether the object is part of a collection, and more, and those attributes are inspected repeatedly while Camel iterates through its list of possible conversion strategies.  This approach makes the following code possible:

However, this flexibility comes at a cost of high and rapid memory allocation.  Every time Camel tries to perform a conversion, it checks to see if it has attempted it before, by creating a TypeMapping object that encapsulates the relationship between the source and destination types, which is then used as a key for Camel’s in-memory map of Type Converters.  Over the course of a single request, we observed hundreds of these objects being created.

Increasing the severity of the issue is the fact that Camel uses this conversion strategy for more than just the exchange payload.  Camel attempts to convert method invocations in routes to its native Processor interface before proceeding with the invocation.

Due to the nature of this issue, fixes are necessarily on a case-by-case basis.  We combed through our Camel routes to find places where we could help Camel eliminate the need to perform these type conversions.

When using Camel’s CXF component, Camel’s exchange is populated with a CXF MessageContentsList object (a subclass of ArrayList) which contains the request payload.  We have always been able to bypass this wrapper by requesting the element class directly from Camel:

Due to the relatively complex type hierarchy of MessageContentsList, this call is quite expensive from a memory allocation perspective.  To streamline this call, we added a Camel processor, invoked at the beginning of every HTTP request, which extracts the request element from the list and stores it directly as the Camel exchange body:

The important point of this fix is that we are requesting the exchange body as its actual type (MessageContentsList).  When this is done, the method call is virtually free, and no TypeMapping objects are created.  Because of Camel’s flexibility, this change is transparent to other places in our code where we extract the message body, but all of those calls are now optimized as well, assuming the requested type is the same as the actual body type.  Since CSI is a routing service that makes calls to other systems, we invoke this processor both when we receive the incoming request from the client and the incoming response from the end inventory system.

In CSI, we have many instances in our routes when we need to invoke a custom converter object on our exchange payload.  We used Camel’s transform API to do this, in Spring DSL:

As noted above, Camel attempts to convert this style of bean invocation into its own Processor.  Using Camel’s to API, we can bypass this:

With this invocation, Camel calls the method directly without trying to convert the bean to a processor.

With these fixes deployed, impact to our GC time was immediate and significant.  Peak GC times went down by around two-thirds.

Due to the random nature of GC-related performance issues, and usage patterns of the CSI service, direct performance impacts can be difficult to measure.  However, we have seen that worst-case execution time is generally much lower and more stable.

6 thoughts on “Getting Over the Performance Hump with Apache Camel”