At Google I/O 2017, Google announced that third-party Actions with transactional capabilities would become available via Google Assistant on both Android and iOS devices.

The day has arrived.

What is Google Assistant?

Google Assistant is a virtual personal assistant that can engage users in a two-way conversation to help them get things done. An Action on Google is a way for developers to bring their products and services to Google Assistant.

On Android devices, Google Assistant can be invoked by holding the home button or saying “Ok, Google.” Then, without installing anything on the device, a user can access your Action by saying “Talk to your_action_name.”

The accuracy of speech recognition and the efficiency of a voice search intrigued us. What if we could help fans find events with simple phrases?

“What is happening this weekend?”

“Where is Jay-Z touring?”

Early this year, we spoke to Google about our vision and had the privilege of being invited to an Early Access Program to develop an Action on Google with transactional and multimodal capabilities. We were so excited about the invitation that we began development immediately. Not only could we help fans find events via speech, but we could also present an interface to help them visualize their options and provide a mechanism for quick, seamless purchases.

The recent release of Ticketmaster’s Action on Google Assistant marks the result of our partnership. Now a fan can invoke the Ticketmaster Action by saying “Talk to Ticketmaster” and be led through a clear, crisp experience to find an event and purchase tickets.

How does it work?

Google has integrated API.AI (an intuitive platform that enables the creation of natural, rich conversational experiences) into the Actions on Google development process. API.AI takes the user’s speech or text and breaks it down into the Intents that the Action developer defines. An Intent is simply a way to express what action should be taken based on what the user said. The Intent that API.AI creates can either be handled in the API.AI agent itself or sent to your webhook (via JSON) for fulfillment. The webhook can determine how to handle the Intent from there. For our specific case, we access the Ticketmaster Open Platform APIs to address the fan’s request. Once the webhook determines how to handle the Intent, the speech, text, or graphics data is sent back to API.AI, which formats the response and presents it to the user.

What are multimodal responses?

The multimodal feature provides an audiovisual component to your Action. The recently-released capability allows you to respond to your users using images, cards, lists, carousels, and suggestion chips. This flexibility means you choose the best way to present a user with options. Below are some examples of these UI elements. Lists, carousels, and suggestion chips are all selectable via tapping the element or speaking or typing the text that is on the element. 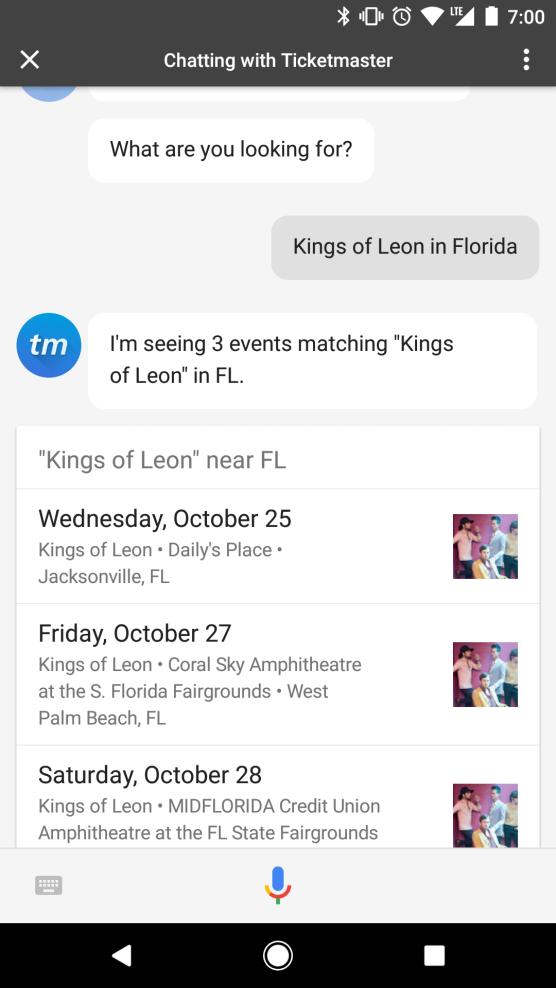 Example: multimodal elements available for Actions. The user is presented with a tappable list of options (left) or a horizontally scrolling carousel (right).

What is the Transactions API?

The Transactions API lets you accept purchases and reservations with your Action. The API provides a structure to help the user quickly build a shopping cart, supply a delivery address (if applicable), establish the payment method, check out, and confirm a purchase. For our specific case, we have chosen to email the fan their tickets.

The checkout card for the Transaction API

The integration of different payment methods is perhaps the greatest feature of the Transactions API. Google has provided a mechanism to either link your Action with an existing Google account or to link your existing web application service via OAuth 2.0. Using this mechanism, vendors can either use previously-stored payment methods or quickly integrate other widely-accepted payment processors such as Stripe, Braintree, or Vantiv.

While Google provides a Node.js SDK to facilitate creating the multimodal and transactional experience, we wanted to create our Action using Kotlin. Since the Kotlin language permits top-level functions (similar to JavaScript) and has robust testing library support (Spek), using Kotlin (over Java) meant we could more easily port Google’s Node.js SDK. Furthermore, Kotlin compiles down to Java byte code so any other Java developers could use it as well. Our own Senior Android Engineer, Patrick Jackson, has taken the JSON spec and created an open-source Kotlin SDK. We encourage other developers to use and contribute to it freely.

The future of ticket purchasing

We are excited to release the Ticketmaster Action on Google Assistant. With the increasing accuracy of natural language processing tools, we believe virtual assistants are the future of human-computer interaction. This radical innovation is another step in the long history of live event ticket purchases: phone calls to the box office, internet searches on the home computer, mobile app purchases, and now, quick, natural conversations with a personal assistant. My favorite group, Straight No Chaser, comes to town every November, and I can’t wait to buy my tickets using Ticketmaster’s Action on Google Assistant!