An agile inception is a collaborative discovery workshop to visually get all stakeholders and team members to a common understanding prior to the start of a project.  The first time I observed my first agile inception I watched 3 transformations occur.  API developers’ eyes widened as they realized for the first time how their “piece” fit into the larger ecosystem and how different applications used it; developers were visibly excited to understand the business problem they were trying to solve and the team rallied together to then solve the problem and ideate based on a common understanding. Product, engineering, UX, program and our stakeholders were bound together by a common mission.   It was one of the most inspiring things I have ever witnessed a team go through. A year and a half later, the Ticketmaster coaching organization regularly facilitates inceptions as a way to kick off a new project or team and the inception process is now part of our technology culture. “The Ticketmaster Way” became a term used to describe how our culture was changing and we began to experiment with new processes and techniques to deliver ideas to our fans and clients.

How we got here

Like many organizations, Scrum gave us a base and common understanding around agile principles and ceremonies.  It became a very dogmatic approach and much of the principals were driven by the project management organization however, the value was not fully understood throughout the team.  Although, we were doing agile things, we were not agile minded.  It was time to change (yes, this was hard!)  At the start of our transformation, most of our teams were comprised of all one specific skillset on one part of the system or site.  We piloted the idea of creating a cross-functional product focused pod. This group of people were assembled as a team and had varied understandings of systems, architecture and applications.  It was then that we piloted our first inception.   The entire team moved to a separate building which gave them ample opportunity to form autonomously.  Ticketmaster’s first inception lasted 2 weeks.   During this time, we also introduced other agile frameworks into the team including Kanban, Lean and some Design Thinking workshops. 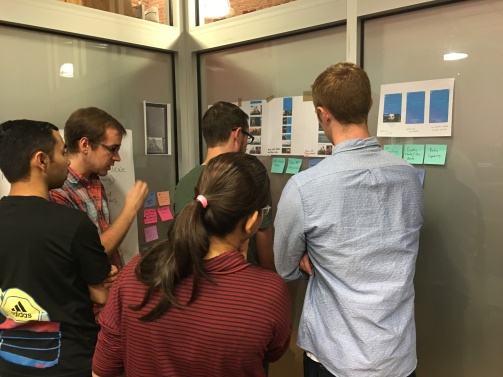 We have since refined our process considerably.  After restructuring most of our teams into pods and over 40 inceptions later, we have found that 2-3 days at the beginning of the project to get to a common understanding is the right amount of time.  Inceptions are critical to help the team spend much less time in the forming and storming stages of team development and shift to norming and performing much quicker (therefore, eliminating waste!)

Inceptions are not only Ticketmaster’s way of kicking off a new project or team, it most importantly aligns the team around a concise mission with measurable business value – outcomes vs. outputs.  In fact, we no longer call projects…”projects”. We deliver on Promises of Value or (POV’s).

Who comes to the inception and what is the outcome?

We bring all team members, key stakeholders and customers into the same room (yes, we fly remote members out for this). The inception is an investment as part of the POV.  We keep the tone neutral by ensuring that it is facilitated by 2 members outside of the delivery team.  We break up the inception into 3 key areas. “The Strategy”, “The Work”, and “The Team”.  Although “The Work” and “The Team” are equally important, strategy is most often done at the product or business level and the team rallies around the work. Think of the team as “The Shark Tank”.  The team needs to be fully bought in and invested in the product that they are building to be inspired and motivated.  Because of this I am going to focus on “The Strategy” portion of the inception in this blog post.

Figure 2: Illustration via Jeff Patton & Luke Barrett for Thoughtworks who re-created the cartoon from an unknown origin.

The Strategy – The Mission

The mission is not about telling the team what they will deliver. It is about understanding the problem that they are trying to solve. Product and design help the team to align on some materials prepared prior to the inception.  These materials help the team understand how the product will fit in to the ecosystem, who our competitors are, target users, the user journey, business drivers and the investment. UX will then will help to put some visual context, early prototypes, personas and design around what we are trying to solve. Finally, the mission statement is the most powerful piece. Why is the mission statement so important? It is what the team believes in and clearly states the problem that the team will solve. Product may come to the table with a mission statement already written, however, I typically have the team rewrite the mission so it is in their voice.  They own it. It needs to be something that any person on the team understands, is able to state and is passionate about. This is where it all starts. In writing the mission statement, I actually prefer a hypothesis statement format over an elevator statement. It clearly states what the team will deliver, the value it will bring to the business and how they know they will be successful.  At the end of the day, we really are building a hypothesis.  We have yet to prove its value.

We are fans too! Bring the team members into the problem

The teams at Ticketmaster are passionate. Employees go to events; they experience shows and connect with the fan. We are fans! This passion becomes a critical piece in binding the team to the mission.  We begin the inception by allowing the team to fully experience the problem that our end-users are facing and empathize with them. We found that creating personas for the team was not enough, but having the team fully immersed in what the fan or client was experiencing sparked instant emotion, processing, and then ideation from the team. For example, in one inception we had the team call customer service and make changes to an order. We recognize that this is an experience that can be much better today, so what better way to have the team understand the pain then to go through it! This is the hand-off. It is at this point the team fully understands the WHY. They are not being told it will save the company x amount of dollars, or that it will improve the bottom line. They understand the pain and can see that this is a problem that can be solved.

When possible, we will bring our client or customer into the inception and have them demo directly to the team in how the product is being used and the many steps they have to go through to find a solution.

How will we know that what the team has been working on has been successful? Output is not as critical as outcomes. Just because we deliver something does not mean that it is meaningful to anyone. This final step is critical to motivate the team and help them feel successful in their journey. Are they going down the right path? Should they pivot? The team, just like the business, wants to know from the customer themselves. What do these measurements look like?

I often hear in these workshops that “we want to improve our Net Promoter Score or improve conversion”. But it’s not clear how this product or feature will move the needle in the many products we are delivering throughout the organization. It needs to be tangible. I usually ask 3 basic questions:

It helps to break down the victory into much smaller wins which keeps the team motivated and excited.

Ticketmaster’s culture is changing. At the core of this change are the people who are passionate about solving hard problems. Given the context, room to innovate, alignment and a way to measure their success the teams become the change agents.  Invest in an inception, it will allow your teams to align early and deliver value quickly.  The key to kicking off a successful inception is by bringing the team into the strategy up front as possible.